Identify the test to be conducted for the determination of the modulus of subgrade reaction in pavement design.

The test to be conducted for the determination of the modulus of subgrade reaction in pavement design is the Plate bearing test.

Plate bearing test (IS-1888-1982) is generally conducted for the determination of the ultimate bearing capacity of soil in the field, which assumes that soil strata are reasonably uniform.

This test is also used to find out the modulus of subgrade reaction useful in the design of pavements and in the design of raft foundations. In this method, static loads are applied on a bearing plate, which rests on the soil at the specified shallow depth till the soil fails or gives increasing settlement of the plate at a particular load. 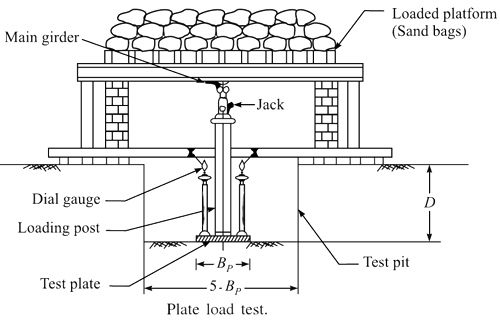 The plate bearing tests are usually performed in cycles in which the applied pressure increases until it reaches the maximum value.